The topic of a creative slowdown is popular among authors in all nooks and crannies of the creative dimension, since it is the ultimate “tiger” that prays upon the auteur world. With the tiger also being one of the strongest animal representations of Korea and its people, the layers of metaphor in the title of the newest Lee Kwang-kuk film, A Tiger in Winter, are abundant, especially when added to the direct translation of its Korean title:  ‘A Winter Guest Who Is Scarier than a Tiger’ (Ho-lang-i-bo-da Mu-seo-un Gyeo-ul-son-nim). 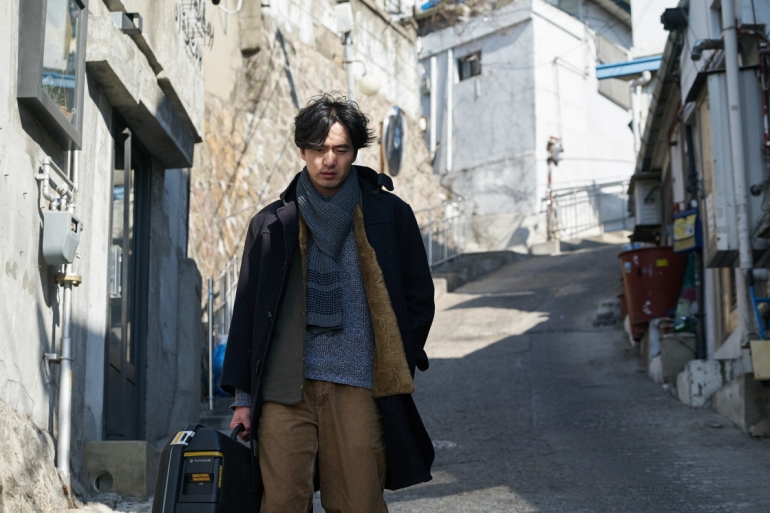 Lee Kwang-kuk has been known for creating metaphor-packed works, with his previous creations being Romance Joe and A Matter of Interpretation. But unlike those two, where reality melded with fantasy to a point of indestinction, A Tiger in Winter has a fairly straightforward plot; on a cold, winter day, a tiger escapes from the zoo and Gyeong-yu (Lee Jin-wook), who just got fired, is told to leave his girlfriends house while her family visits. Having nowhere to go, Gyeong-yu first imposes on a friend and after a few days, tries to return to his girlfriend’s house, only to learn that she had moved out and disappeared. With the only stable thing in his life gone, Gyeong-yu falls apart; he tries to earn some money as a daeri unjeon, a replacement driver for customers with cars that had one drink (or ten) too many; and it is on the job that he meets his ex-girlfriend, Yu-jeong (Go Hyun-jung). She became a published novelist, which was Gyeong-yu’s dream, but is now struggling with a writer’s block over her second novel – and is drowning her own monsters in bottles upon bottles of soju. The two lonely, lost souls with a shared dream meet, with a tiger still on the loose – can they reconnect, or will they fall prey to their own fears and desires?

With a fairly straightforward method of storytelling that only skims the edges of all the metaphors that surround the story, we witness the harrowing journey of a man who has been tired out by his own lack of creative drive, who has given up on his dream, but still has some pride left, and a woman who is beyond pride. Even if it sounds like a tiresome story, there is a certain element of hope that gets woven into the plot with a great subtlety – even in the desolate, winter land, where a hierarchical society only accepts winners and stepping onto everybody else to get ahead is by most people seen as acceptable (as long as you do not get caught), moving forward is still possible, even if at a snail pace, and somewhere along the way, we might even realize that our demons – the tiger that chases us – can be our source of inspiration, a message that Lee Kwang-kuk seems to be dedicated to conveying to his audience in all of his works.

It is safe to say that the story has almost no fresh elements with an abundance of overused issues and topics, any yet the viewers do not leave the cinema feeling empty. It is an interesting achievement, since the audience spends the better part of 107 minutes watching two people slide lower and lower on the scale of life. May it be the really decent acting – almost expected from the veteran actress Go Hyun-jung, with the refreshing new levels from the previously mostly visual Lee Jin-wook – the great photography from Kim Hyoung-gu, or the few bright moments with the ultimately not-that-depressing ending, but A Tiger in Winter manages to stand out from the many tired-of-existence, helpless and hopeless films that swarmed this year’s Busan International Film Festival. It is definitely worth the watch and will hopefully find its way even outside of the festival circuit.

The review was originally published on October 26 2017, on http://www.viewofthearts.com